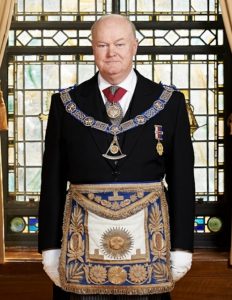 AN ADDRESS BY THE MW THE PRO GRAND MASTER PETER LOWNDES

Read below or view the PDF here.

Brethren, 2018 has brought many changes, not just within UGLE, but also across the masonic world. In the last three weeks there have been new Grand Masters in Scotland, France and Norway. The Deputy Grand Master was in Oslo and I went to Edinburgh and to Paris. Representing the MW Grand Master abroad fulfils and reinforces our reputation as the premier Grand Lodge and I strongly believe that the better we know our counterparts in the foreign constitutions, and the better they know us, the easier it is to have meaningful discussions on any points of mutual interest or indeed controversy that might arise.

At home, we have had 28 changes of Provincial or District Grand Masters. The Deputy and Assistant Grand Masters have been greatly involved and we have also had the benefit of the support of the Second and Third Grand Principals in the Royal Arch. We are enormously encouraged by the calibre and enthusiasm demonstrated by our new Rulers and I am pleased that we seem to have a strong team of leaders throughout our Constitution.

Some years ago, Provincial Grand Masters suggested that the Rulers got even more involved in the appointment of their successors. This rather surprised us as we felt it could be seen as unwelcome interference. However, we were encouraged to think about the qualities that a good Ruler in the Craft might possess, and how this might manifest in the success of their Province. As a result, the whole system is now more robust and we are seeing the benefits. This is not in any way meant to denigrate those who have gone before – far from it, but with decisions being more transparent, I believe the sharing of the burden of decisions has been welcomed, and the Craft is benefitting as a result.

Brethren, I am sure that you will agree that it is so important that those appointed to any office within the Craft know what is expected of them. This is equally as true of those within a private lodge as it is at Grand Lodge or Provincial or District Grand Lodge level.

Believe it or not brethren, in addition to selecting those we think will do the best job and are the best fit, we now actually tell our Provincial and District Grand Masters what is required of them. About three times a year we run courses for future and new Provincial and District Grand Masters and the feedback that I have had from those who have attended has been extremely positive. I can emphasise what a success this project has been as I have had nothing whatsoever to do with it. A great deal of the credit for the quality of these courses goes to RW Bro Michael Ward, VW Bro Graham Redman and the team here at Freemasons’ Hall and I thank them for their work on my behalf and on behalf of the recipients.

I sometimes wonder brethren if we take our private lodge officers for granted. Do we expect that each year the officers will automatically know what is expected of them? In the vast number of cases the main ceremonial offices are filled by those who are working their way up the lodge’s ladder and they will have benefitted from their Lodge of Instruction and rehearsals. It is the more administrative offices that may need assistance. That assistance is available from the centre or in the Provinces, particularly for Secretaries, Almoners and Charity Stewards. However, I believe there are still a large number of lodges who see the collar of the Almoner and Charity Steward as needing a pair of shoulders to sit on. Surely the offices deserve better than that, and care should be taken when making these appointments, after all they are both involved in the charitable work of the lodge, which is so dear to our hearts, and so important to the public perception of who we are and what we do.

There is one last lodge appointment that I would like to comment on, and, whilst not technically an officer of the lodge it is an important role. It is the job of the Royal Arch Representative. Many of you will have heard me advocating the encouragement of Craft masons to join the Royal Arch and I won’t go through the reasoning again today. Suffice it to say that one of the best recruiting tools is to have such a Royal Arch Representative in each lodge. It is a lodge appointment and it should be carefully thought through so that the member with right skill set has the job. It seems to me brethren that consultation with the Grand Superintendent, whether or not he is the Provincial Grand Master has merit. When a Province has separate leaders, I am sure they will both be equally keen for the right choice to be made and would welcome such consultation.

Brethren, as we come to the end of another calendar year, I really believe that we can look back with pride in what has been achieved in many aspects of our work and, equally, can look forward with great optimism to where we are going and how we are going to get there. To paraphrase the Grand Secretary at the start of the year, can we ever get enough of enough is enough.

Brethren I hope you all have a wonderful Christmas holiday and enjoy a well-deserved break.