The District Grand Master, RW Bro Michael Hadjiconstantas, accompanied by the Assistant District Grand Master, W Bro Leandros Zachariades, District Officers and other members of our District visited the Grand Lodge of Greece on the 6th of December to present to the Grand Lodge of Greece our donation to the people of Mati, who suffered from last Summer’s fire. For a Greek version please see the pdf at the end of the article. 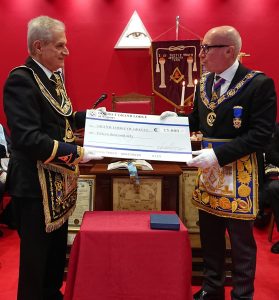 On arriving to Athens, we were welcomed by the Grand Treasurer RW Bro Pavlos Sarof and other members of the Grand Lodge of Greece.

On that evening, we attended a joint meeting of Asklipios Lodge No. 159, Pistis Lodge No. 71 and Vyzantion Lodge No. 60, at the newly erected magnificent Masonic Centre at Kifissia. The Temple was filled to its capacity with over 180 Brethren in attendance, and, unfortunately many latecomers had to remain outside. Our original delegation of nine was enhanced by the arrival of a dozen members of King Tefkros Lodge No. 9786 who reside in Athens, headed by the WM of the Lodge and his Wardens, and also including Past Masters of the Lodge and holders of District Grand Rank. 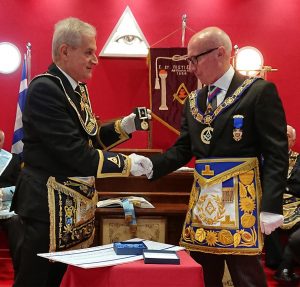 The Grand Master of Greece, MW Bro Constantinos Politis presents to our District Grand Master, RW Bro Michael Hadjiconstantas the Certificate of the Grand Lodge of Greece confirming this honorary membership and a gold coin bearing its insignia.

The meeting then continued with a lecture presented by the PSGW of the GL of Greece, RW Bro Theodosios Tasios, on the symbolism of the Opening of the Lodge in the First Degree. The delegations then retired from the Lodge. All the Brethren assembled then retired to the Festive Board held in the Masonic Centre at Kifissia.

We were all touched by the truly warm welcome and generous hospitality from the brethren of the Grand Lodge of Greece and felt a lot of pride of being members of our universal Fraternity.