On the first Thursday in October, December, February and April Installation is October.

A number of Royal Arch Companions, headed by E.Companion E.J. Georgiou, Considered that another Chapter could be formed to fill the resultant void in Royal Arch Masonry in the Western part of the Island, a view supported by the Apollo and Agapinor Lodges. Brethren eligible to join the Royal Arch and Companions residing in the Limassol/Paphos areas had expressed interest but objected to travelling to the capital, Nicosia, some 150 kilometres distant.

Supreme Grand Chapter, on a recommendation from the District Grand Master, agreed that a Petition for a second Royal Arch Chapter could be submitted. Subsequently, on 19 November 1994, the Apollo Chapter No.7886 was Consecrated at Episkopi Garrison within the British Western Sovereign Base Area by E.Comp. G. Purser, PGSN, Grand Director of Ceremonies, assisted by other members of Supreme Grand Chapter. There were 30 Founder Members. E. Comp. D.L. Amon P.Prov.G.Stwd (Suffolk) was installed as the first 1st Principal, E.Comp. E.J. Georgiou as 2nd Principal and E. Comp.C.W. Jennings as 3rd Principal.

In Greek mythology Apollo was a child of Zeus, the King of all the Gods. Every morning Apollo, who was the Sun God, rose at dawn to drive his dazzling chariot, the sun, across the sky in order that the world may be light and warm. Apollo was also the patron of music and poetry. It seemed appropriate that the Apollo Chapter should follow its namesake and communicate (Masonic) light and warmth (happiness). Music and poetry are illustrated in the Chapter dining room where there hangs an original oil painting, completed by one of the Founders, Comp.George .E. Lawrence, depicting Apollo playing his lyre. 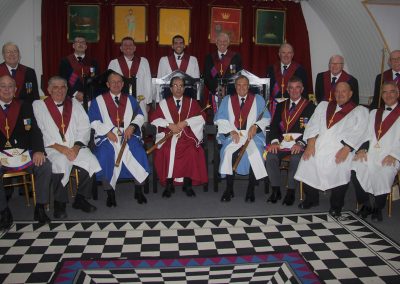