The Holy Royal Arch in Cyprus The establishment and growth of the Holy Royal Arch in Cyprus

The procedure of the introduction of the the Royal Arch Order in Cyprus is a peculiar history with exceptional interest as it had taken place as a result of enthusiastic love and dedication to Freemasonry.

The growth of the consecrated Freemasonry in Cyprus as it is proved by the first days of its existence, it is based on the unyielding desire of some vigorous Masons. Any difficulties or adversities never became an obstacle for the Masons of Cyprus to show an unbelievable activity throughout the months in the early beginning of Freemasonry and keep it the same through the time. 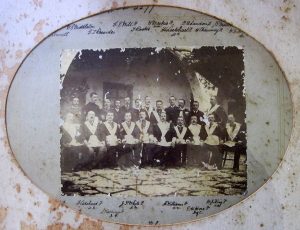 The establishment of the first symbolic Lodge of St. Paul’s in 1888 was made in a short period of only some months by a workman of the Royal Art with the assistance and the enthusiastic interest of other Military Masons who stated in Cyprus in that period of time. Ex∴Comp∴ John Percy White (1858-1916) founded Freemasonry and created strong background in order to remain vivid and to be grown up until today for 126 years.

After the consecration of the first craft Lodge of St Pauls in Cyprus in 1888, the first man who conceived the idea for creation of a Royal Arch Chapter was John Percy White who propagated this idea in early January 1889 to the Master of St Paul’s Lodge 2277EC W∴ Bro∴ Henry Silvester a RA Member.

During that time Bro∴ J∴P∴ White was not even a royal Arch Mason. He then conceived W∴Bro∴ Silvester to write a letter to the most experienced and high rank Mason in Cyprus who was R∴W∴Bro∴ George R Harriot a Past Provincial Grand Master of Wigton and Kirkcudbright under the Scottish Constitution. He was a Royal Arch Mason exalted in the Naval and Military Chapter No. 40 SC. R∴W∴Bro∴ George R Harriot knowing the Masonic Regulations expressed his reservations for this venture but he was not against. At that time, only ten RA masons were in Cyprus two of them belonging to the SC and IC. The only two Comp∴ they could be eligible for the Chairs of Principals were of Scottish and Irish Constitution.

Additionally, all the possible founders belonged to the Yorkshire Regiment which might be directed to leave the island. And of 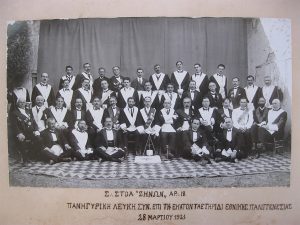 course the cost of establishing a RA Chapter was estimated at about 45 Pounds. As far as we know from the financial archives of St Paul’s Lodge a big number of money had been generously offered by the founders of the Lodge. This money disposed for the rent of a house to be the masonic building, the purchase of the furniture and all of the Lodge’s equipment including the Warrant, regalia and any other necessary object. For these reasons he suggested to W.Br. Silvester to reserve his wish for the future.

W∴Bro∴ Silvester was not satisfied by that answer so he sent a letter to the Grand Chapter asking the consecration of a RA Chapter in Cyprus. The Grand Scribe E Col. Shadwell Henry Clerk P.G.D. and P.G.Soj explained by his letter of 21st March 1889 the terms for such a formation, informing the applicant that three Installed Masters needed to be the Principals designate in a minimum number of nine RA Masons of EC. Just four months after the Consecration of St Paul’s Lodge, only two Installed masters were in Cyprus: W∴Bro∴ Silvester and R∴W∴Bro∴ G.Harriot PPGM.

In his letter E∴Comp∴ Shadwell Henry Clerk gave a brilliant idea to W∴Bro∴Silvester which was very helpful and let the Masons of Cyprus to materialize their wish to create a RA Chapter. His suggestion to W∴Bro∴Silvester was to apply for the assistance of Companions staying in the neighbouring city of Alexandria to come in Cyprus. In Egypt that time was a DGL with many Lodges and Chapters. 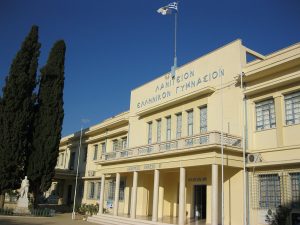 Laniteion Secondary School. A donation by N.P.Lanitis, a distinquished Mason

The late Bro∴ John Percy White was not disappointed by the results of his attempt so he found the road of communication with the Companions of Alexandria. Bro∴ John Percy White found one other faithful ally and supporter to his attempt who was an enthusiast Mason M∴Ill∴Bro∴ John Karageorgiades 33ο . He was a doctor and executive personality of the Greek community of Cyprus. He was elected two times as Mayor of Limassol, he has been distinguished as litterateur, translator, writer poet and philosopher. Later he will be proved as the founder of the Greek Masonry and of the Scottish Rite Masonry in Cyprus. He was initiated in 1865 in the A’ Panellenion Lodge in Athens. He was again initiated in the St. Paul’s Lodge in 1889 and later became Master of this Lodge. He created Zenon Lodge No.18. He also established Kimon Lodge in Larnaca(1918) and Solon Lodge in Nicosia(1921). He also established the Rosecroix Chapter Platon No.6 (1899), the Lodge of Perfection Elephtheria No. 2 (1918) the Areios Pagos No. 3(1921) and he was a founder of the St. George’s MMM Lodge No.492 (1896) He was also a Founder of Aesculapius Lodge No.2410EC. He had served for many years Freemasonry as the Grand Inspector of the Higher Degrees Lodges in Cyprus under the auspices of the Grand Orient of Greece.

These two enthusiast men were occupied by unyielding obstinacy to create a Royal Arch chapter. For this reason they care to attach communication with the Masons of Egypt. That was anyway the concept of Grand Scribe E, Col. Shadwel Henry Clerke. Finally, these two men ignored any difficulty and they both went to Alexandria where they had been exalted into the Rank of the Holy Royal Arch in Zetland Chapter No. 1157EC on the 15th December 1889. Their adventurous action proves their sincere enthusiasm for their aim. 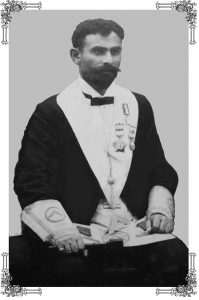 A year after his exaltation Comp∴J∴P∴White addressed the Grand Secretary by his letter of 1st January 1891 informing him that he wishes to establish a second Craft Lodge in Larnaca. His action aims firstly to the further growth of Freemasonry in Cyprus and secondly to obtain a third Installed Master in order to be able to apply for a Warrant of a RA Chapter. In the meanwhile W∴Bro∴ Silvester had left the island and the only two Installed Masters in Cyprus were J.P.White and G.H. Harriot. It was agreed that when the new Lodge would be created, Bro∴ Frederik Oxley Harvey a Member of the Albion Chapter No.9 would be the Master Designate and then Third Principal designate for the Chapter.

The Grand Scribe E, Col. Shadwel Henry Clerke gave a positive answer with his letter of the 21st January 1891. Then, the time of service of J∴P∴White for Her Majesty’s Forces ended but fortunately the Royal Army gave a generous facilitation to Bro∴ J∴P∴White to extend his service in the island for two more years “in recognition of his part in this matter and in the interests of the craft”. This arrangement had a significant meaning for the creation of the RA Masonry in Cyprus.

Let us not forget that J∴P∴ White spearheaded in all the procedures of consecrating the St. Paul’s Lodge in 1888. From the archives of his Lodge it is obvious that he took initiative for the most jobs including the rent and furnishing of the first Masonic Building. He signed the first Rent Contract by his responsibility.

During March 1891 it was decided that Comp∴ John Percy White be the First Principal Z as a recognition of his enthusiast perseverance for the idea of consecrating a RA Chapter in Cyprus.

Later on, the Petition for the Consecration of the new Chapter had been completed with the eleven names of the petitioners. In order to complete the sufficient number of the three Installed Masters to be the three Principals designate they had to wait for the consecration of the second Craft Lodge in Cyprus in order to ensure that Comp∴ F∴ Harvey the first Master of it, be a qualified Principal designate. The new Lodge was St. Georges No. 2402 consecrated on the 14th November 1891. 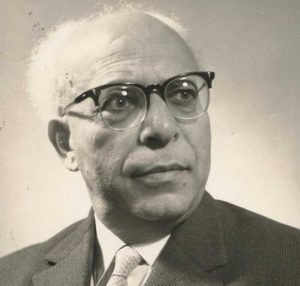 The Charter of Constitution of the first RA Chapter in Cyprus was issued on the 4th November 1891 and the only remained question for the Consecration of the RA Chapter was to gather the equipment and complete all the preparations. Finally the great day of the Consecration of the first Chapter of the Holy Royal Arch in Cyprus was the 15th April 1892. This conspicuous event took place in Limassol at the Masonic building of the St. Paul’s Lodge. For a long time of 102 years St Paul’s Chapter 2277 continued to remain the only one RA Chapter of the island. In the time followed during the 20th Century in Cyprus seven more craft Lodges had been created and Masonry under EC flourished with a considerable number of Members in comparison with the population of the island. The first Royal Arch Chapter, as the only one, became a centre of unity and communication of the Cyprus Masons as they could join in a common masonic organization from all towns of the island. Of course, this joined communication was not the single one but was added to the several intervisitations between the seven Craft Lodges of the island.

The development and the biggest growth of Royal Arch Masonry in Cyprus started during the last decade of the 20th Century. The need of an extension of the Royal Arch institution in the island was recommended by the Members of Apollo Lodge No.7886 and Agapenor Lodge No. 8905 as well. A steering committee headed by E∴Comp∴ Eleutherios Georgiou organized the preparations. On 19th Nov 1994 a second Chapter was consecrated in Episkopi Garrison within the British Sovereign Area with the name Apollo Chapter No.7886.

That event was followed by the consecration of this Cyprus Principals’ Chapter No 9655 on 15th May 1997 in Limassol. This Chapter was sponsored by St George’s Lodge No. 3135. The purpose of its creation was to present lectures, grow research and generally to heighten the interest of Companions. 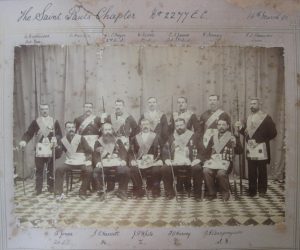 The same day one other grate event signified the growth of RA Masonry in the island when the District Grand Chapter of Cyprus had been proclaimed and created in Nicosia headed by the late E∴Comp∴ Simon F.N. Waley PGS (Kent). The concept of establishing a Chapter near the residential range of the Lodges seemed to be successful and practical. For this reason, a new Chapter has been consecrated on the 13th May 1999 for the needs of the Masons of the East part of Cyprus and that was Othello Chapter No 5670 sponsored by Othello Lodge 5670 and by Lord Kitchener Lodge No. 3402. Later on the need of a new Chapter in Paphos appeared, especially after the consecration of Dionysos Lodge No. 9706. Then E∴Comp∴ Mervin Matthews headed a steering Committee to organize this attempt. The Consecration took place in Limassol on the 6th April 2001 by the Most Honourable Marquis of Northampton.

Today, we can be proud to ascertain that 122 years after the introduction of RA Masonry in Cyprus by the St Pauls Chapter No.2277, our Order is being grown and strengthened. There are today five Royal Arch Chapters in the island with totally 235 Members and an era of prosperity and growth it is recorded under the leading of the Grant Superintendent E∴Comp∴ Theodosios S Theodossiou, the Dep. Grand Superintendent E∴Comp∴ E.S. Williams PGSoj and of all the DG Officers of the District Grand Chapter of Cyprus.