Meeting at the Venus Beach Hotel,
Tomb of the Kings Road,
Paphos.

At 6.00 pm on first Tuesday of April, May, June, September , October, and November (Installation)

Agapinor Lodge was consecrated on 1 December 1979 by R.W.Bro.Sir James Stubbs, KCVO, OSM and other distinguished Officers from the United Grand Lodge of England. 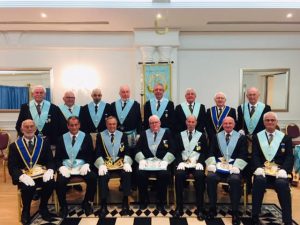 The Lodge is in the Western part of the Island. It took its name ‘Agapinor’ from one of the Kings of Paphos. This being the seventh Lodge to be established in Cyprus, the way was open for a District to be formed.

Agapinor Lodge shared premises in Paphos with Kinyras Lodge No.64, under the Grand Lodge of Greece, until 1996 when it decided to move to the Venus Beach Hotel. A complete set of Lodge furnishings was manufactured locally and is stored in the Hotel. The move to a hotel has proven to be a convenient and successful solution from all points of view.

On the 11th May 2000 the Dionysos Lodge was Consecrated as the Daughter of the Agapinor Lodge and on the 1st December 2004 the Lodge celebrated its Silver Jubilee with 8 Brethren who were original Founders taking the Offices for the night that they originally held at the Consecration of the Lodge. The Lodge looks to the future with optimism as its numbers increase by each meeting.