On Second Tuesday of each month excluding July to September

Apollo Lodge, a daughter lodge of Lord Kitchener Lodge was consecrated on 13th May 1963 in St John’s School Hall, Royal Air Force Episkopi in the Western Sovereign Base Area of Cyprus. Apollo held its first two meetings in the premises of St Paul’s Lodge in Jerusalem Street, Limassol and returned there briefly in 1974 following the Cyprus Coup and subsequent Turkish invasion of Northern Cyprus. All other meetings have been held in the Masonic Rooms in Episkopi.

The move of Lord Kitchener Lodge from the Limassol area to Dhekelia meant that some members had to travel the length of the Island to Attend their Lodge, hence a petition to form a new Lodge. (Apollo Lodge)

Apollo Lodge derives its name from the nearby ancient Sanctuary of Apollo whose remaining pillars are shown on the Lodge Banner and the front piece of the Lodge Summons.

The Lodge meets in an ancient Nissan hut, once part of Episkopi Garrison, the grounds of which are conducive to al fresco summer social functions.

Our membership numbers are more than healthy and we continue to serve the needs of the Servicemen and attached civilians posted to the Western Sovereign Base Area. We also welcome many ex-Service applicants and those within the community who share our values. We continue to enjoy the support of Episkopi Station in that we have a secure tenancy of our current premise

Click on link below to read the Festive Board speech delivered by V.W.Bro Rob Cowin. 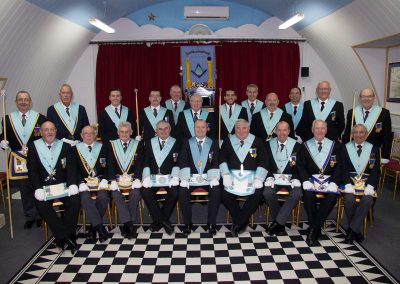 For further information please contact the lodge Secretary by e-mail: by email here.