3rd Tuesday of every month except July, August & December Installation Meeting Is October 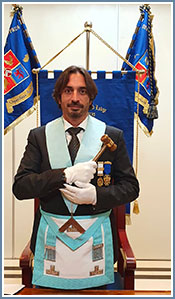 Phoenix Lodge No9817 (U.G.L.E) was ‘born out of the ashes’ of its previous incarnation under the Grand Lodge of Greece when in May 2006 it, after being sponsored by King Tefkros Lodge No. 9786, along with Zenon Lodge No. 9818 became the Latest lodges to come under the banner of the District Grand Lodge of Cyprus. A service of consecration took place on Saturday 20th May 2006 at the Masonic Temple, Jerusalem Street, Limassol

The Symbolism of the Phoenix

The Phoenix is one of a number of firebirds found in various mythologies which dies after a prescribed period in a pyre which it creates by fanning its wings only to be reborn from it’s ashes. Other birds were the benne, an ibis like bird, associated with Osiris in Egypt, the Onech of the Hebrews associated with Enoch, a symbol of a secret cycle and initiation, the Turkish kerkes which lives a thousand years is self-consumed and then reborn seven times after which the day of judgement is supposed to arrive, the Persian Simorgh which also symbolises the successive destruction, alternatively by a fiery and watery deluge, and reproduction of the world.

Herodotus mentions that he was told of the Phoenix by Egyptian priests who described it as being the size of an eagle, with a finely crested head and sparkling plumage as well as eyes shining like stars. It lives for six hundred years in the wild and then prepares a funereal pile of aromatic wood on which it sits, ignites and is consumed, only to be reborn from it’s ashes.

The Phoenix universally symbolises immortality and is depicted from very early on in Christian meeting places, even in the catacombs, symbolising Christ’s resurrection and immortality. It was also adopted by Aumont, De Molay’s successor as Grand Master of the Templars, as a symbol on his seal with the motto, ‘Ardet ut vivat’ – she burns that she may live. It is worth mentioning that there are about 60 Masonic lodges that bear the name Phoenix.

Finally the name of our lodge links us with our sponsors, as Phoenix was Achilles’ tutor and when the Homeric hero was brooding in his tent over the loss of Chryseis to Agamemnon. Phoenix led a delegation of three to talk with his pupil and persuade him to return to active duty The two other delegates were Odysseus and Aias Telamon, King Tefkros’s brother.

For further information contact the lodge Secretary by email here.